The capacitor as an electrical capacitance

Characteristics of the real capacitor

To describe the function of electronic circuits, it is usually sufficient to only consider the main properties of the individual components. In the case of the ideally assumed capacitor, it is the capacitance where the current leads the voltage by exactly 90 °. Practice shows that there are no ideal components. Depending on the current test conditions, other mostly disruptive properties appear that are present in every real component.

There are no ideal components. The idealization is the simplified representation adapted to the situation.

The connection lines of a capacitor have ohmic components and inductive properties are effective at sufficiently high frequencies. In addition to a mostly negligible connection inductance, there is also an inductive component, mostly less than 50 nH, especially with film and rolling capacitors and all aluminum electrolytic capacitors. It is called equivalent series inductance, ESL, Equivalent Series Inductivity. Direct values ​​are rarely found in data sheets. Since the capacitive and inductive properties work in opposite directions, the operating capacitance at high frequencies is lower than the specified nominal value. At very high frequencies, series resonance can occur and the inductive component also predominates.

In the case of a capacitor in an alternating current circuit, the deposits are periodically reloaded and the alignment of existing dipoles of the dielectric must follow the alternating electric field. Work is done in the molecular range, which means that the capacitors heat up measurably with increasing operating frequency. The released thermal energy is assigned to an ohmic resistance, which forms a series circuit with the capacitor. At the same time, the ohmic connection resistances can be recorded in it. In data sheets it can be given as equivalent series resistance, ESR, Equivalent Series Resistance.

A charged capacitor loses its charge over time outside the circuit. The dielectric has an extremely high resistance but is not an ideal insulator. Depending on the material used, a more or less low residual conductivity remains, over which the charge is slowly equalized. In the equivalent circuit diagram, the insulation resistance of the Riso dielectric is connected as an ohmic resistance in parallel with the capacitance. The leakage currents become less important with increasing frequency, since the reactance of the capacitor in the parallel connection becomes the determining factor.

The equivalent circuit diagram of the real capacitor can be viewed as an RCL series resonant circuit. At a certain frequency, the two reactive components XC and XESL have the same value. A minimum must then appear in the amplitude-frequency diagram and the capacitor only acts like an ohmic resistor at this frequency.

In general, the insulation resistance is a measure of the quality of the insulation material that is located between two conductors or, in the case of coaxial cables, between the conductor and the conductive screen. The value is primarily determined by the material property. The standardized measurement is carried out in accordance with IEC 60512–2. In the case of cables, it depends on the length and is specified in Ω · m or GΩ · km. The values ​​should be 1 GΩ km. The resistance value decreases with increasing length.

The dielectric is located between the metal layers of a capacitor as an insulator. This material has a finite insulation resistance because there are no ideal insulators. To a good approximation, the resistance value only depends on the area and the thickness of the dielectric. The value is proportional to the ratio of thickness to area: Riso ∝ d / A. Likewise, the capacitance C of the capacitor is proportional to the ratio of area to thickness. The insulation resistance corresponds to the direct current resistance and is almost always given in MΩ · μF for film and ceramic capacitors for a reference temperature of 20 ° C.

For the experimental determination of the insulation value, the capacitor is charged to its nominal voltage value. It then remains with open connections for a certain time. After this time, a voltmeter with a very high internal resistance (Ri> 10 MΩ) is used to measure the charge still stored in the capacitor as residual voltage. The insulation value and insulation resistance can be calculated from this measurement.

To check an insulation value known from a data sheet, the capacitor is charged as described above. After a time constant has elapsed, the residual voltage is measured. If the value is above 37% of the charging voltage, the insulation value specified by the manufacturer is adhered to.

The loss factor and the goodness

In AC voltage operation, the field forces also act on the dielectric when the capacitor deposits are recharged. The electron shells of the solid-state molecules are deformed and should they form dipole structures, these are reoriented according to the field direction. The displacement work in the dielectric is partly converted into heat. With increasing frequency, the heat development increases until the reorientation of the molecular dipoles can no longer follow the excitation frequency.

In every parallel connection, the applied voltage is the reference. The reactance of the capacitor and the reactive current ix increase with increasing frequency. As long as the reorientation in the dielectric can follow the applied alternating field, more thermal energy is also generated. It arises at the equivalent parallel resistance, the value of which decreases, with the active current component increasing through the resistance. With a comparable linear change in both quantities, the loss factor should be frequency-independent. In practice, the frequency dependencies of the loss factor are quite different for the different dielectrics.

The following diagram provides information on this (source: Betz, Huber, basic knowledge of electrical engineering - power engineering / communications engineering 1980). The manufacturer specifies the loss factor for a specific frequency. The information is given for 800 Hz or 1 MHz. With increasing frequency, the molecular structures can no longer follow the acting alternating field as quickly. The delayed reorientation has an additive effect on the loss angle. 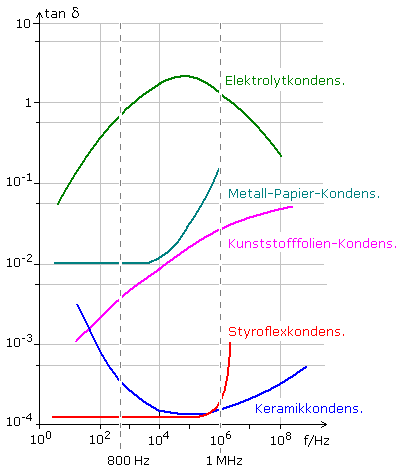 The current flowing to the capacitor is greater than the current calculated according to the ideal reactance. In terms of circuitry, this is possible by connecting an ohmic resistor in parallel. In an alternating current circuit, a parallel resistance can be converted reversibly into its equivalent series resistance. The very large value of a parallel resistor then has a very small value as a series resistance.

The ohmic losses of the contacts and component connections that form a series circuit with the capacitor should also be recorded. All losses that occur are assigned to an equivalent series resistance ESR equivalent series resistor. Rolling capacitors also have an inductive component, which also takes into account the inductive portion of the connecting wires at very high frequencies. They are recorded in the serial ESL reactance.

The loss factor d or DF dissipation factor is the ratio of the ESR to the capacitive reactance. It depends on the frequency and thus corresponds to the tangent of the loss angle δ. It is often given in percent and is calculated using the formula: DF = RESR · ω · C · 100%. Values ​​are also given in the form tanδ · exp (−4) with the meaning tanδ = value · exp (−4). 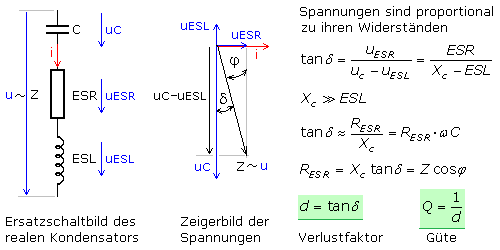 As is currently customary, the determination of the loss factor d is based on the series equivalent circuit of the real capacitor. The vector diagram of the voltages can be created using the current as the reference value for a series connection. The tangent of the loss angle δ is the ratio of the series resistance to the difference value of the two reactances XC and ESL. The quality factor Q is the ratio of the energy stored in the capacitor to the energy losses and is the reciprocal of the loss factor d.

The smaller the ESR value, the smaller the loss angle and thus the loss factor. The phase shift of voltage and current through the capacitor then approaches φ = 90 °. Most manufacturers indicate the loss factor tan (δ) in the data sheets. ESR values ​​are less common, but can be calculated from the frequency-dependent loss factors and the capacity. The measurement frequencies specified for this are 1 kHz, 10 kHz and 100 kHz. The very small and therefore negligible ESL values ​​are almost never given.

For electrolytic capacitors, a maximum permissible DC leakage current is specified after an operating time of 2 or 5 minutes. Many manufacturers use their own formulas to calculate the leakage current, which differ in a factor with the dimension A / (V · μF) and an additional μA current value. The residual current is calculated from the capacity in μF, the DC voltage in V and a factor between 0.03 ... 0.001.

The power dissipation of a capacitor

Capacitors get noticeably warm in alternating voltage and pulse operation. The power loss that is implemented in the dielectric of a capacitor can be calculated if the loss factor is known: 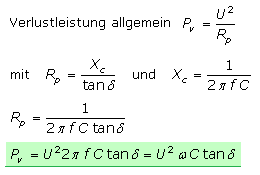 An example calculation shows that the power loss that occurs is not negligibly small. A metal-paper capacitor with C = 1 μF is operated in a circuit with 100 V and the frequency f = 5 kHz. The loss factor can be taken from the diagram above at tan (δ) = 0.01. The power loss is then calculated as Pv = 3 W.

The temperature behavior of the capacity

Deviating from this equation, in the HDK ceramic capacitors, dielectrics with particularly high permittivity have non-linear temperature dependencies with a maximum at the Curie temperature. In most practical applications, the TK value is of minor importance. It is important to observe it in special oscillator circuits and devices for calibration purposes.