What is grown in Fiji

Fiji at a glance

The archipelago was once called “cannibal islands” because humans have occasionally eaten each other since prehistoric times and up into the 19th century. Real hunger for meat was less relevant than the widespread notion that the power of what was killed was transferred to the person who consumed it - in the course of tribal feuds a common habitus that was primarily reserved for the chiefs and priests of the clans. Since they, as living representatives of the gods, were not allowed to touch such food with their fingers, they were fed with wooden forks by their subordinates. It was British missionaries who sought to put a stop to cannibalism. Including sacrifices in their own ranks. A missionary is said to have been consumed in 1867. 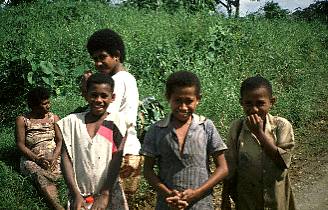 A colorful mixture of peoples lives in the archipelago

Today such cruel rituals have disappeared, the appetite of the Fijians is limited to typical crops such as sweet potatoes, cassava, pineapples and bananas. The thirst for adventure of non-residents is satisfied by dreamy backdrops of crystal clear sea, powder-white beaches and seemingly endless palm groves. But Fiji has much more to offer than just a south-west Pacific sun-beach image. On the main island of Viti Levu, the refreshing mountain heights rise up to 1,323 meters, river valleys cut through an impressively lush green, waterfalls tumble down the slopes. The mosaic of the seas of blossoms is made up of more than 3,000 types of plants, the most glorious Christmas stars flourish almost like weeds.

Everywhere in the archipelago - this is another special feature - one encounters the touching frankness and friendliness of the Fijians. When meeting the locals, kava continues to play an important role. Kava is a stimulating and tongue-numbing drink made from the dried roots of the pepper bush and consumed in small bowls. In the past, the roots were chewed up by young men, spat into bowls and made into a spicy mix by infusing them with water. Today, however, you can buy powder that has already been crushed and filtered through a cloth. The kava ceremony, where you traditionally sit on floor mats, is a sign of hospitality and an expression of community spirit. Anyone who enjoys such a reception as a stranger should not fail to bring their hosts a bundle of kava roots - available at all local markets. You can make yourself understandable in English. The language of the former British foreign rulers is widespread and the official language, but does not guarantee that one will be understood everywhere. In Fijian you can get in the mood for the language practice with a “bula” (pronounced: mbula; “hello”) and you will surely reap a smile from your counterpart. 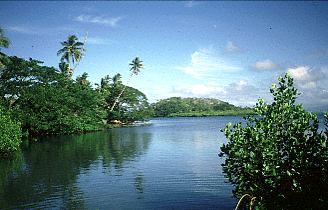 Fiji is far from the world in the Southwest Pacific: around 2,000 kilometers north of New Zealand, 3,000 kilometers east of Australia, 5,000 kilometers southwest of Hawaii. The archipelago is on the dividing line between Melanesia and Polynesia and is believed to have been settled 4000 years ago. It was Abel Tasman who was the first European to see the islands in 1643. James Cook followed him in the 1770s, and in 1789 the infamous Captain Bligh and his family paddled the waters. After the mutiny on the Bounty, led by ship's mate Fletcher Christian, Bligh and 18 companions were abandoned in a dinghy near the Tonga Islands and are now on their way to Timor. They had no eye for the scenic beauties. In the archipelago they were chased by cannibals and rowed for their bare life; the lake north of Viti Levu is still known today as Bligh Water.

Fiji's native population is mostly melanic with curly hair and dark skin color, while they have been culturally influenced by Polynesia. Of course, the maintenance of tradition does not go so far as to still use bark fiber (tapa) as clothing or necklaces made of whale teeth as jewelry. And very few people today live in a traditional bure, a hut made of plant material that was originally covered with palm fronds. Beyond normal houses, corrugated iron has long since started its triumphant advance as roofing for the less well-off. Despite all its seclusion, Fiji is not behind the moon. Video is a matter of course, great enthusiasm arises especially in rugby. 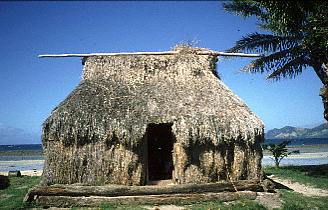 Traditional buildings on the coast

The Indians make up an exceptionally high proportion of the population, who from the second half of the 19th century - at the beginning of the colonial era - were brought into the country by the British and used as workers on the plantations. Later they stayed in Fiji, their current descendants kept themselves afloat as farmers or with all conceivable commercial transactions. With the Indians, the Muslim and especially the Hindu beliefs came into the country, which can be seen in numerous monuments. The Sri Siva Subramaniya Temple, the largest Hindu temple in the country, is located in Nadi.

The Fiji archipelago is made up of around 360 islands, islets and coral atolls. The largest and most important islands are Viti Levu and Vanua Levu. Viti Levu is home to the two international airports, Nadi and Nausori, and Suva, the capital since the end of the 19th century, is located in the southeast of the main island. A city tour through Suva takes you to the government buildings, Albert Park, the Botanical Garden and past the University of the South Pacific. A large open-air park takes place on Saturdays, and lovers of venerable accommodations can stay at the “Grand Pacific” hotel, which was inaugurated in 1914. In Suva's “Fiji Museum”, memories of the famous “Bounty” emerge alongside a number of artefacts.

The coral coast spreads out on the south coast of Viti Levu, and Sigatoka is an important city in the southwest. There are also the Sigatoka Sand Dunes, Fiji's first national park established in 1989, which covers 650 hectares and has a visitor center. Organized showtime prevails in Sigatoka with a touristic ride on the Coral Coast Railways' sugar cane train. Including cocktail, music and "warrior escort" to Nayawa Village, where you will be received with the kava ceremony.

Around 80 percent of Fiji's around 800,000 residents live on Viti Levu and Vanua Levu, 170,000 in the greater Suva area alone. Other islands, on the other hand, are completely privately owned and have luxurious resorts where you can relax to your heart's content and unwind in the hammock. An example: Sonaisali, a 42 hectare small island with the exquisite Sonaisali Island Resort.

Fiji's island worlds are widely scattered and repeatedly bundle smaller units such as the Yasawa Group, the Mamanuca Group, the Lomaiviti Group and the Lau Group. More money-minded visitors start “flightseeing” with local airlines such as “Island Hoppers”, “Sunflower” and “Turtle”, while on a lower budget they can go island hopping by ferry. There is a lot of ferry traffic between Suva (Viti Levu) and Savusavu (Vanua Levu). In addition, the ships from Suva regularly go to destinations such as Levuka (on Ovalau), Koro, Vunisea, Kavala Bay, Nabukalevu-i-ra and - also on Vanua Levu - Nabouwela and Labasa.

No question about it, South Seas island dreams come true in Fiji. Just like on Vanua Levu, where you drive through fantastic palm groves, keep on the south flank on the more than one hundred kilometers long Hibiscus Highway and get from Savusavu to Labasa via the inland mountain route. Southeast of Vanua Levu is Taveuni, with almost 500 km² the third largest island in the archipelago, which is nicknamed "Garden and Flower Island" and attracts visitors with various resorts. A long volcanic chain stretches over Taveuni, which rises up to almost 900 meters and attracts the rain clouds of the trade winds.

Simpler accommodation can also be found on islands such as Ovalau, which belongs to the Lomaiviti group and where Levuka, the former capital of the archipelago, is located. In Levuka there was once the first post office in the archipelago, the first school, the first bank, the first hospital and the first town hall. The first newspaper appeared here too, and great writers like Rudyard Kipling (“The Jungle Book”) and Somerset Maughan were equally caught up in the mood. Starting with Levuka, which now has 2,000 inhabitants - alternatively: directly from Suva - you set off by boat to Leleuvia, a coral island to the south with palm trees and wonderful white beaches. Leleuvia is the springboard to organized diving and snorkeling trips to the reefs of the Moturiki Passage and to the neighboring island of Moturiki with its village church in Uluibau.

The small Beachcomber Island has remained particularly popular, with its palm trees and white beaches and often a colorful entertainment program in the central accommodation complex. Undemanding backpackers are satisfied with a bunk bed in the huge dormitory under the palm frond roof, while the more demanding ones prefer a room in the complex. Beachcomber Island is off the west coast of Viti Levu and can be reached by boat from Lautoka; the crossing takes between one and a half and two hours.

Even under water, Fiji exudes special charms - just like around the Lomaiviti group and in the reefs of the Wakaya and Makogai protected areas - and shows that the archipelago is equally suitable for romantics as for adventurers. In the ocean you can get to the bottom of a colorful variety of corals and fish and with luck you will see reef and hammerhead sharks, barracudas, rays and turtles. Providers such as Ovalau Watersports (Levuka, Ovalau) have adapted to their divers and snorkelers, offering Padi diving courses and diving packages.

General travel information and current Entry requirements as well as notes on security and medical care can be found on the following pages of the Foreign Office (Berlin): Foreign Office

In the tropical-maritime climate of the Fiji Islands, two seasons can generally be distinguished, which are determined by the precipitation: summer with a warm rainy season from October / November to April / May and the somewhat cooler "winter" with less rain from April / May until October / November. At the beginning of the year, depending on the region, several thousand millimeters of precipitation can fall, and the months between December and April are feared because of possible hurricanes. The months June to October are considered the best travel time. The water temperatures hover around 24 ° C between May and October and 28 ° C between November and April.

The local currency is the Fiji dollar (FJD. There are 1c, 2c, 5c, 10c, 50c and 1 FJD coins and notes to the value of 2, 5, 10, 20 and 50 FJD. There are no restrictions on the import of money. Hotels, Restaurants, car rental companies, travel agencies etc. accept internationally known credit cards such as American Express, MasterCard, Diner's and Visa.

18,272 km², so (in imaginary compressed form) about the same size as the federal state of Saxony. The archipelago consists of around 360 islands, less than a third of which are inhabited. The largest islands are Viti Levu and Vanua Levu.

Around 800,000 inhabitants, which corresponds to a population density of around 44 inhabitants / km². Eight out of ten Fijians live on the two main islands of Viti Levu and Vanua Levu. Around 70,000 people live in the capital Suva and around 170,000 in the greater Suva area. Other metropolitan areas are Lautoka (approx. 40,000 inhabitants) and Nadi (approx. 30,000 inhabitants). The Melanesian-Polynesian-influenced Fijians make up the majority of the population, followed by Indians and - to a lesser extent - Chinese and Europeans. Many Indians are followers of Hinduism.

International airports on Viti Levu in Nadi and Nausori, important port in Suva.

The most important branch of employment is agriculture. Sweet potatoes, cassava, corn, bananas, pineapples, coconut palms, coffee, sugar cane and citrus fruits are grown. The cultivation of fruit (e.g. papayas) and vegetables is often for personal use. In smaller farms, copra is obtained, the dried, high-fat nutritive tissue of the coconut, which is pressed out to yield coconut oil. Fishing also provides a not insignificant source of income. In industry, food, mining, and tourism come first.