Chymosin (also Rennin) is the main active ingredient of rennet (also rennet, rennet enzyme or Rennet) and is used in the production of cheese or quark.

Rennet is indispensable in the production of almost all hard and soft cheeses. It splits the casein protein in the milk at a certain point and thereby causes it to coagulate (“curdling”): the casein clumps and separates from the watery whey. The cheese then begins to mature. The production of quark also begins with the curdling of the milk.

In traditional cheese production, rennet is added to initiate the curdling of the milk. This is obtained from deep-frozen calf stomachs by extraction and subsequent purification. Suckling calves need the chymosin enzyme produced by special cells in their stomach wall in order to be able to use the milk of the suckler cows.

However, for some time now, the demand for cheese can no longer be met with traditional calf rennet. There are therefore rennet substitutes of various origins in use.

Compared to the classic rennet, rennet substitutes have disadvantages. Particularly in the case of vegetable products (bedstraw), enzymatic side reactions occur when they are used, which can lead to undesirable changes in the taste of the cheese. There are no such disadvantages with genetically engineered chymosin. 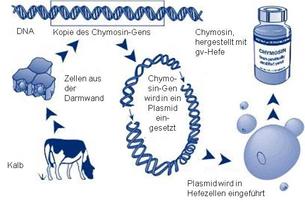 Manufacturing: The production of rennet or chymosin with the help of genetically modified microorganisms is now widespread. A large part of the cheese is made with it worldwide.

Procedure: The chymosin gene isolated from the stomach of calves is transferred to suitable production organisms - usually molds or yeasts. These are multiplied and cultivated in closed systems (fermenters), where they release the chymosin into the culture broth. The chymosin is separated and cleaned of possible impurities or residues of the genetically modified microorganisms.

Application: It is estimated that cheese in the USA and Great Britain is largely made from genetically engineered chymosin. In Germany, many manufacturers now use microbial rennet, which is produced without microorganisms classified as GMOs. The quality of microbial rennet has improved significantly in recent years.

Most of the chymosin used goes into the whey whey powder, the rest remains in the cheese.

Approval: In Germany, microbial rennet - and thus also chymosin produced with the help of genetically modified microorganisms - is a "rennet substitute" and must be approved in accordance with the provisions of the cheese ordinance. There are now several such chymosin preparations on the market. Just like the cheese made with them, they can be sold freely and without special requirements.

Labelling: In the case of foods, enzymes do not have to be included in the list of ingredients (with a few exceptions). Many manufacturers declare “microbial rennet” on their cheese products to inform vegetarians that no rennet made from calf stomachs has been used. No distinction is made between “genetically modified” and other microorganisms.

In principle, the production method of enzymes is not part of the labeling. Therefore, enzymes produced with genetically modified microorganisms do not have to be specially labeled. - As with organic products, no genetically engineered rennet may be used for cheese or quark with the “ohne Gentechnik” label.