Almost all major car manufacturers had to contend with a significant drop in sales in 2020. In the three-way battle for the unofficial title of the global premium market leader, surprisingly little has changed, because the fundamental balance of power is similar to last year: Depending on how you look at it, either Mercedes-Benz or the BMW Group is at the top. Our graphic with differently colored bars for the core and subsidiary brands shows at first glance how the different interpretations come about, both of which are justified.

Depending on how you look at it, the sales figures for the MINI and Smart brands are more than just tipping the scales: while the BMW Group has expanded its small car subsidiary into a relevant sales factor in recent years, Smart plays a role in overall sales for the Mercedes Car Group practically no role. Against this background, it is obvious that a different approach is favored in both groups. If you only look at the core brands, Mercedes is clearly ahead of BMW. Audi remains practically only a spectator: The Ingolstadt-based company currently only plays a role in the battle for the premium top in a few individual markets and cannot compete with BMW or Mercedes worldwide. 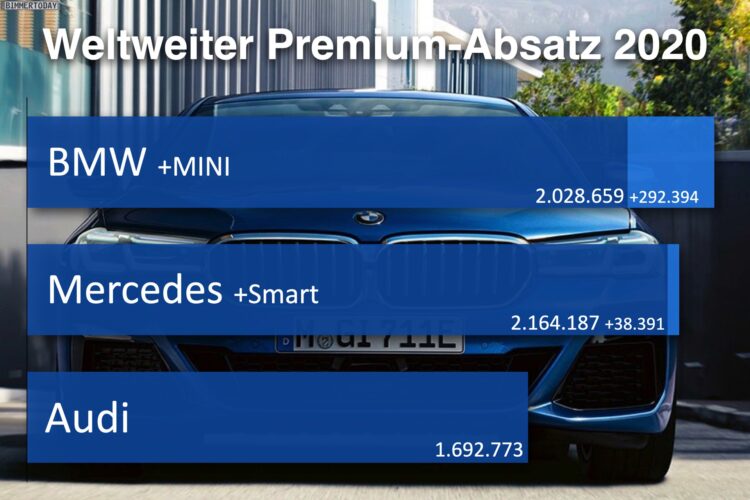 If one looks more than the mere sequence and also pays attention to the balance of power, there are also clear trends in 2020: BMW was able to reduce its deficit in the core brands from around 171,000 to around 135,000 units, while MINI has its lead over Smart by almost 230,000 Could enlarge 254,000 units. The logical consequence is that the lead of the BMW Group over the Mercedes-Benz Car Group has also increased, in concrete terms it is even more than doubled: Instead of 58,812 units, there are now 118,475 units between the groups.

By far the largest single market for all three car manufacturers is China: The BMW Group sold a total of 777,379 vehicles there in 2020, Mercedes closely followed with 774,382 units. The former China leader Audi could not change its role as pursuer in 2020 and is in third place with 727,358 units, whereby the gap between the Ingolstadt-based company has become even greater than in 2019. Audi is also behind BMW in 2020 in global competition got a little bigger, while the gap to Mercedes could be shortened at least a little.

Those responsible at the car manufacturers rate the premium sales figures of their brands in 2020 as follows:

Pieter Nota (Member of the Board of Management of BMW AG, responsible for customers, brands and sales): “We met the effects of the corona pandemic with great agility in sales management and production. We succeeded in closing the year with a strong fourth quarter and once again leading the premium segment worldwide. Thanks to our Efficient Dynamics technologies and the more than 135,000 electrified vehicles sold in Europe, we have exceeded our CO2 fleet targets in the EU and were even able to undercut the statutory limit by a few grams. "

Ola Källenius (Chairman of the Board of Management of Daimler AG and Mercedes-Benz AG): “We were able to more than triple sales of our plug-in hybrids and fully electric vehicles. The demand for our xEVs increased particularly towards the end of the year. Our internal forecasts for 2020 suggest that we achieved the European CO2 targets for cars last year. We are driving our 'Electric First' strategy and the further expansion of our electric model offensive. As things stand, we expect that we will also meet the CO2 targets in Europe in 2021. ”

Hildegard Wortmann (Head of Sales and Marketing at Audi AG): “In the middle of last year, thanks to a very strong international team effort, we emerged from the first wave of corona with verve. After a strong third quarter, this also led to a successful final spurt in 2020. The global situation currently remains challenging. Nevertheless, we have set ourselves ambitious goals for 2021, want to continue growing and look confidently to the future. "