How does someone develop misogynistic tendencies 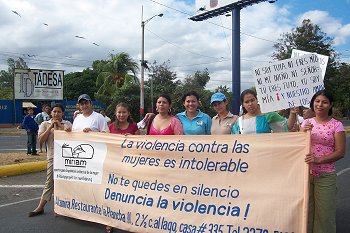 Where do misogynist tendencies in a society come from, what contributes to their reproduction and how do they influence local society? A new study by Oxfam in eight Latin American and Caribbean countries gets to the bottom of these questions and examines which gender-specific role models adolescents and young adults between the ages of 15 and 25 have and how they arise.

Nicaragua is one of the countries examined. The TERRE DES FEMMES partner organization Asociación Proyecto MIRIAM has been working there for years with women affected by violence, providing them with legal and psychological support and offering them the opportunity to become financially more independent and live more independently through vocational training courses.

Especially the so-called machismo shapes the societies of the countries involved in the study - sometimes much more than one might imagine. 84 percent of those surveyed state that they believe violence against women is a consequence of inequality, but they do not see themselves as responsible for changing the current situation. Rather, 67 percent of those surveyed believe that the state has a duty to reduce the consequences of male violence.

The control of men over women or the subordination of women to men is socially accepted and internalized to such an extent that for most of the young people surveyed, the control of the smartphone, the social networks, the real friendships and the clothes of the partner do not take shape of violence. Nicaragua and Colombia have the highest number of people who say that their friends are monitoring their friends' smartphones and social networks.

Oxfam also writes in the study that one of the most common observations among young people is the normalization of male violence, on the grounds that men are naturally prone to violence.

It is therefore not surprising that 63 percent of those surveyed between the ages of 20 and 25 believe that women are primarily with men because otherwise they feared something might be done to them or even killed. Fear of death threats is particularly high in the Dominican Republic, Guatemala and Nicaragua.

In their study, the authors describe the importance of institutions such as authorities, schools, hospitals etc. and what role they play in our lives and the reproduction of gender roles and world views. You write: “Institutions have the power to dictate rules to us and to deny the interests of certain groups. They successfully contribute to the institutionalization of gender-based inequalities by encouraging girls and boys, men and women to slip into roles prescribed by society. "

Therefore, in their opinion, it is particularly important that we question our behavior. From the author's point of view, social media are an important source of reaching young people and helping them to question their habits.

The legislative and executive branches are also of great importance. While there has been general progress in the region with legislation to protect women and girls, TERRE DES FEMMES and Asociación Proyecto MIRIAM have been following developments in Nicaragua with concern for some time: the comprehensive law introduced in 2012 after years of struggle by women's rights organizations Protection of women from violence is being weakened more and more and the implementation also leaves a lot to be desired.

Nevertheless, we are not giving up and are continuing to work hard to improve the situation of women in Nicaragua both legally and economically. The Oxfam study authors conclude by saying that judicial authorities continued to play an important role in combating violence against women. Since the political situation in Nicaragua has been critical since April 2018 and the judicial authorities can hardly be relied on, we are trying to empower girls and women on site in another way: through solidarity among women - a measure that, according to the authors, is crucial to overcoming gender-based Violence contributes.

Show your solidarity and support our work in Nicaragua! Donate now to work with us to strengthen the work of Asociación Proyecto MIRIAM in Nicaragua!