Kidney stones (Urinary stones, nephrolithiasis, urolithiasis): Solid structures in the kidneys and the urinary tract that hinder the outflow of urine. They consist of crystallized substances that are normally dissolved in the urine. Depending on where the stones are, the doctor speaks of kidney stones, pelvic stones, ureter stones or bladder stones. The stones can be more than the size of a hazelnut, but they can also be tiny (urine gravel) and, depending on their location, cause severe to very strong undulating pain.

Men are twice as likely to be affected as women, most often between the ages of 30 and 50. The majority of the stones pass spontaneously with the urine, the others can almost always be removed by medical treatment. Since kidney stones keep re-forming, after the stone has passed or been removed, prophylaxis with medication or a special diet is often recommended.

Renal colic: Strongest wave-like to cramp-like pain in the posterior lateral lower abdomen (kidney bed) as a result of entrapment of kidney or ureter stones, rarely also due to blood clots or dead kidney tissue. This prevents the urine from flowing out.

When to the doctor

Call a doctor immediately if

Kidney, renal pelvis and ureter stones (kidney stones for short) can consist of very different materials. The most common are calcium oxalate stones (containing lime and oxalate, ~ 70%), uric acid stones (urate stones ~ 15%) and struvite stones (magnesium-ammonium-phosphate stones, ~ 10%). What they all have in common is the mechanism of stone formation: at the beginning there is a substance (calcium, oxalate, uric acid) that is present in high concentrations in the urine. Usually these solids are dissolved in the urine, like sugar in tea. Above a certain amount, however, the solubility of the substance is exceeded and it crystallizes, i.e. it becomes solid. More and more similar molecules attach to the crystal and the stone grows.

Kidney stones rarely occur only once, and the risk of repeated (recurrent) stone formation is very high.

Left: bladder stones, all from one patient. Right: bladder stone that caused great pain for the patient (arrow). When the doctors surgically removed the stone, they also extracted a shrapnel from his bladder, which had apparently "slumbered" there for over 60 years.
Georg Thieme Verlag, Stuttgart

Colic occurs when a kidney stone loosens from the renal pelvis and migrates towards the bladder. The stone gets stuck in the narrow ureter and irritates the mucous membrane. The muscles in the ureter wall tense up and thus trigger the severe pain. Once the stone has worked its way up to the bladder, the pain stops suddenly.

On the basis of the characteristic pain of renal colic, the doctor usually quickly suspects a kidney stone disease. He uses ultrasound to secure the diagnosis and determine the current position and size of the kidney stones, which are clearly visible from a diameter of 0.5 cm. He often does a CT scan with which he not only detects urinary and kidney congestion, but also rules out important differential diagnoses. Since most kidney and ureter stones contain calcium, the doctor can also clearly see them as light structures in the X-ray, but calcified lymph nodes or veins can look exactly the same. If surgical therapy is planned, the doctor will also arrange for a urogram or a retrograde ureteropyelography (representation of the urinary tract, in which the contrast medium is injected "retrograde" upwards from the end of the ureter or urethra)

Urine and blood tests provide information about whether there is an additional infection of the lower urinary tract or kidney damage. Important laboratory tests are z. B.

Especially in patients who repeatedly suffer from kidney stones, the exact composition of the stones is examined after the stone has been removed. Knowing the individual substances and determining the calcium and phosphate levels in the blood make it easier to prevent further relapses. 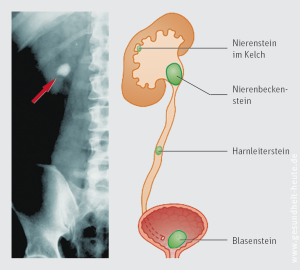 47-year-old man who was admitted to the hospital with severe pain on the right side of the lower abdomen. The kidney pelvis stone the size of a hazelnut is clearly visible in the X-ray image (arrow). The urine could not get through the narrow renal pelvic outlet, which led to the backlog of urine. In this case shock wave lithotripsy (ESWL, lithotripsy) was required. The schematic drawing on the right shows other possible locations of stones.
Georg Thieme Verlag, Stuttgart

Acute colic. In the case of colic, treating the pain has the highest priority: The doctor gives painkillers, e.g. B. Metamizol intravenously, which also has an antispasmodic effect, and paracetamol as a suppository or tablets for mild pain. If these painkillers are insufficient, he prescribes opiates such as pethidine (Dolantin®); at the same time, he prescribes anti-inflammatory drugs (e.g. Diclofenac®).

Stone removal. Medicines and various surgical procedures are available to the doctor to treat kidney stones. Which method is used depends on the type and size of the stones:

For all other kidney stones as well as unsuccessful medication-based stone dissolution, z. B. the following procedures are available:

Bed rest is not required, on the contrary: the patient should move and drink as much as possible to encourage stone removal. For pain, the doctor prescribes Diclofenac®, if necessary also metamizole. Most smaller kidney stones up to 5 mm in size go off spontaneously in this way within 4 to 6 weeks. During this time, the patient is given a sieve to filter his urine and to catch the stone. This not only serves to prove the stone loss, the captured concrements can also be analyzed for their components. If the doctor knows the composition of the kidney stones, he can adapt the preventive treatment to it.

In some cases, stones can be removed with medication (oral chemolitholysis) in the case of uric acid stones in lengthy therapy over several months with the drug allopurinol (e.g. Zyloric®), which reduces uric acid build-up in the blood.

Extracorporeal shock wave lithotripsy (ESWL). This procedure is the most common in ~ 90% of kidney stone treatments today. Here, the patient lies on a special treatment table with a recess in which the body is coupled to the treatment unit by means of sound-conducting gel. The stone can be localized under combined X-ray and ultrasound control. The sound waves are aimed precisely at the part of the body where the kidney stone is located, so that the stone is crushed (disintegrated) in several sessions. The fragments then easily pass through the urine.

Ureterorenoscopy (URS). Kidney stones over 2 cm in size, kidney stones in the renal pelvis and ureter stones must be removed endoscopically if possible. For this purpose, the endoscope is advanced to the stone, in ureterorenoscopy (URS) via the urethra and bladder, in percutaneous nephrolithotomy PNL alternatively through an incision in the skin. The doctor then uses a laser or ultrasound to crush the stone and remove the fragments from the ureter with a small snare or forceps (snare extraction).

If these preventive measures are not sufficient, there are various drugs that make the formation of new kidney stones more difficult. B. change the pH of the urine so that the stone-forming minerals remain dissolved and do not crystallize out.

Important note: This article has been written according to scientific standards and has been checked by medical professionals. The information communicated in this article can in no way replace professional advice in your pharmacy. The content cannot and must not be used to make independent diagnoses or to start therapy.
<?