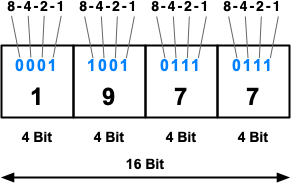 In addition to the number systems, there are also codes to represent and process numbers digitally. The BCD code stands for Binary Coded Decimals, which means binary coded decimal digits. What is meant are dual-coded numbers. In the BCD code, each decimal digit is represented by 4 bits of the corresponding dual number.
Another name is 8-4-2-1-BCD-Code, because it is the decimal value of the dual digits.

Each decimal digit of the decimal number is expressed by its own 4-bit binary number or binary code. The 4 bits are called a tetrad (Greek: group of four).
Only 10 tetrads are required for the 10 decimal digit. The 6 other tetrads are called pseudotetrads and no longer belong to them. They are omitted or have no function. They do not appear or must not appear in the BCD code.

Example of a two-digit decimal number

Identification of the BCD code

Disadvantage of the BCD code

BCD arithmetic is rarely used. The memory is being used too wastefully. And compared to 32-bit floating point numbers, BCD numbers only provide a slightly higher level of precision. However, there is still a need in finance and science for very high accuracy that goes beyond floating point representation. There is, for example, Densely Packed Decimal Encoding, which is supported by the hardware on some computers or is available via software libraries. For mainframe computers as well as technical-scientific pocket calculators.

BCD coding is used in digital technology and digital displays. For example as a 7-segment display.
Digital clocks run inside with BCD code. The time in the DCF77 signal is also encoded as a BCD code.

Electronics simple and easy to understand

The electronics primer is a book about the basics of electronics, components, circuit technology and digital technology.

Perfect for beginners and newcomers