The void ratio can be zero

According to DIN 55 946, bitumen is a dark-colored, semi-solid to spring-hard, fusible, high-molecular hydrocarbon mixture, which is obtained in the gentle processing of petroleum, and the soluble in carbon disulfide portions of natural asphalt and earth wax and montan wax (see. Römpp Lexicon of the Chemie, 7th edition, page 377).
Such substances, which are referred to in the Anglo-Saxon area (especially USA) as asphalt, are used in road construction in a mixture with limestone powder, granite, basalt, diabase, gabbro flour.
The use of natural asphalt is of particular importance in this context. Natural asphalt can be used in mixtures with bituminous binders according to DIN 1995 for the production of mortar-rich surface layers (e.g. mastic asphalt, asphalt concrete, sand asphalt and asphalt mastic). Such a natural asphalt is z. B. Trinidad-Epure, which is composed as follows:

The following operations are carried out to produce the powdered bitumen concentrate:

1. Heating the respective silica and bitumen to 140 ° C in a drying cabinet.

2. Submission of the weighed amount of silica in the mixing vessel. The bitumen is added in portions while stirring (by hand or with a paddle stirrer, depending on the amount), vigorous mixing until the homogenization is visible.

3. Application of the still hot mass onto a sheet metal, distribution until it cools to room temperature.

4. The cold, crumbly to granulate-like mass is crushed and ground in the Braun kitchen mixer for approx. 30 seconds.

5. Application of the powder to a 0.75 mm sieve, sieving, homogenization in a glass vessel in the Turbula mixer.

The bulk weights of the respective powders are determined (g / cm3). In order to obtain information about the storage stability, pressure tests are carried out over 36 hours in pressure cylinders (049 mm, layers 3.2 kp = 1.7 N / cm2 and 11.2 kgf = 5.95 N / cm2) carried out at normal temperature. The emphasis is on the school grading system from 1-6. The results are shown in Table 1.
In order to check the temperature stability of the individual bitumen powder, the respective samples are tempered in the drying cabinet as the temperature rises (increase in each case by 10 or 20 ° C). The results are shown in Table 2.
The bulk density is determined according to DIN
Evaluation table for pressure test:

A detailed description of this evaluation procedure can be found in Seifen-Öle-Fette-Wachse 8900 Augsburg, Volume 94/1968), Issue 12, pages 849-858.
A special edition of this reference has appeared as no. 31 in the series Pigments from Degussa. 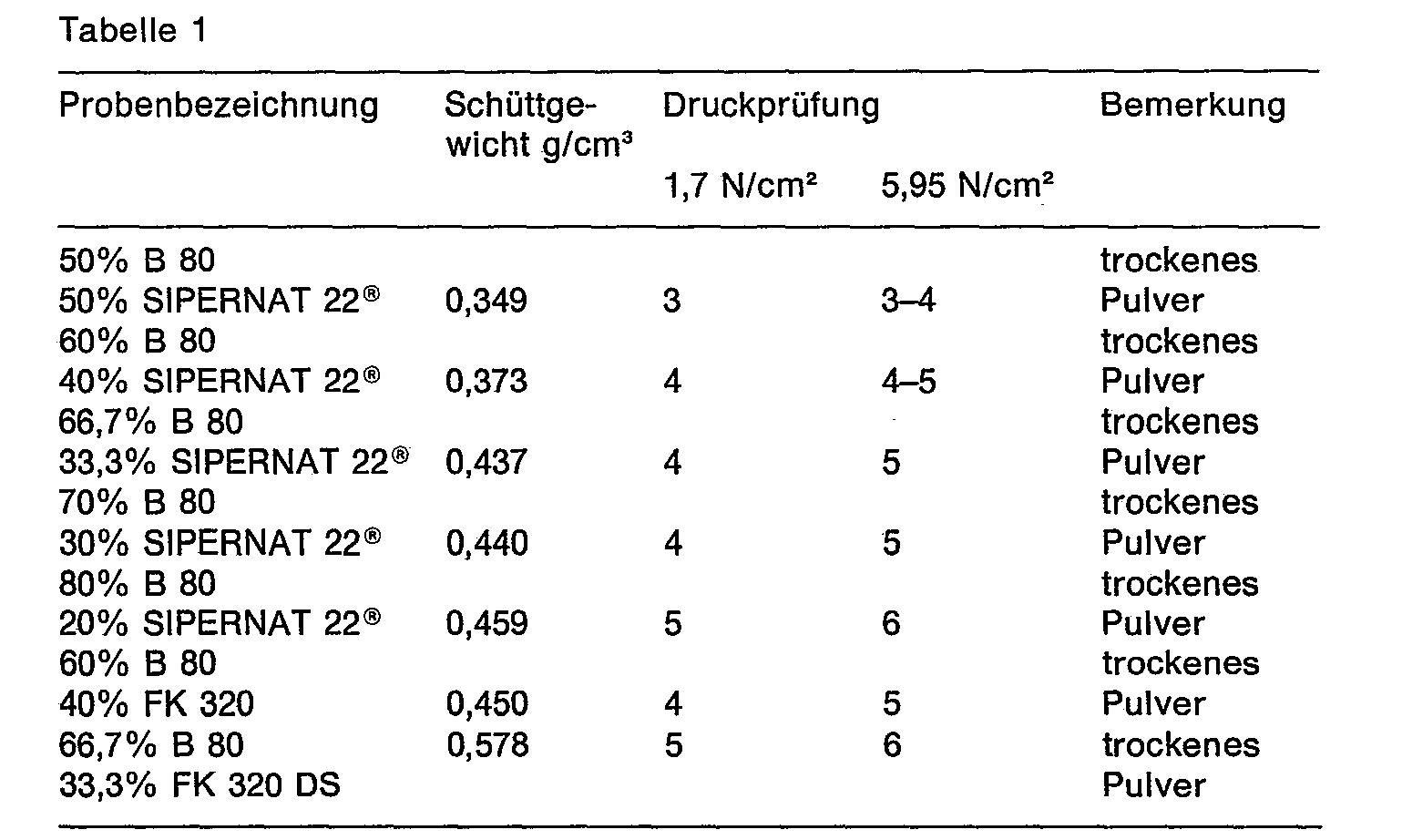 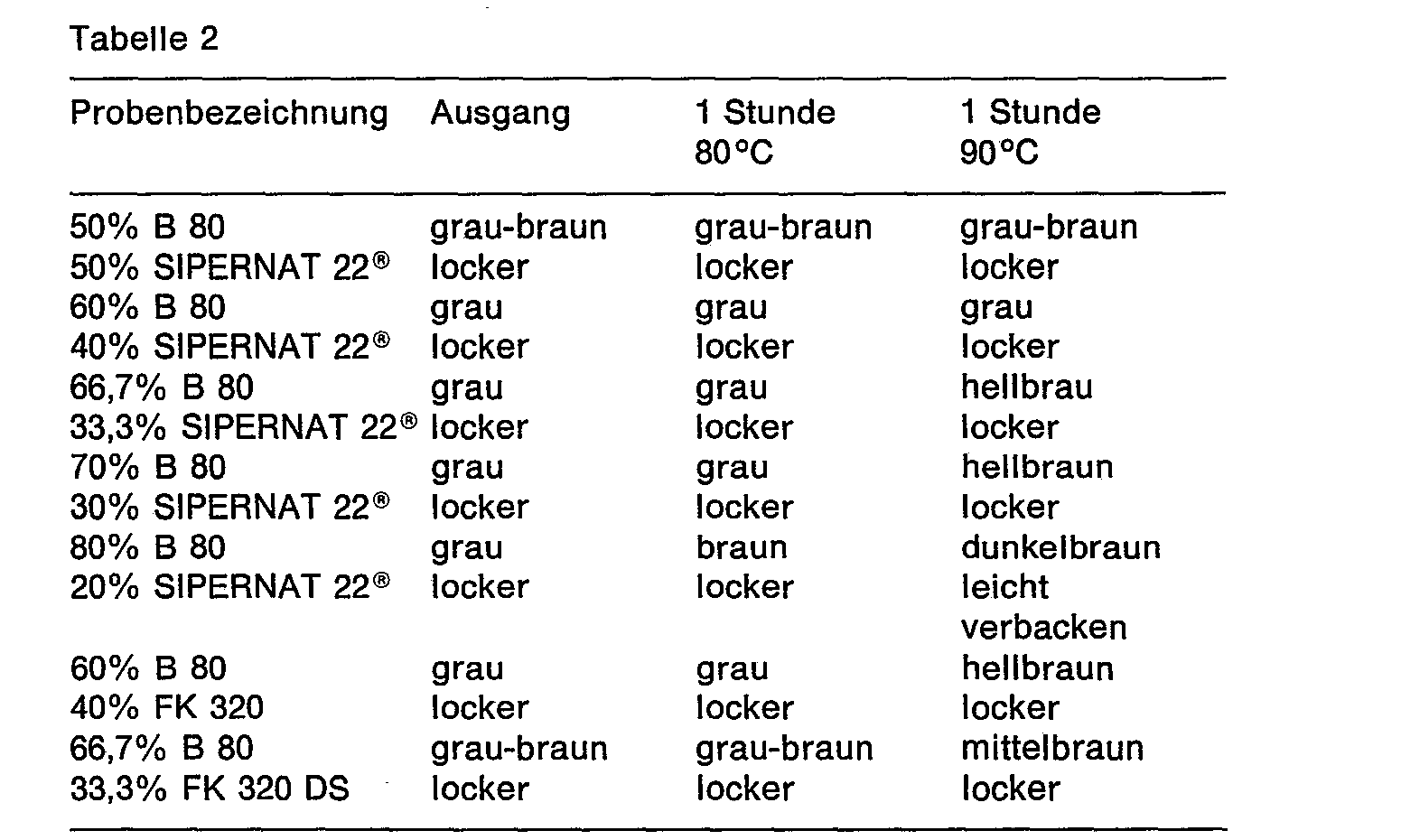 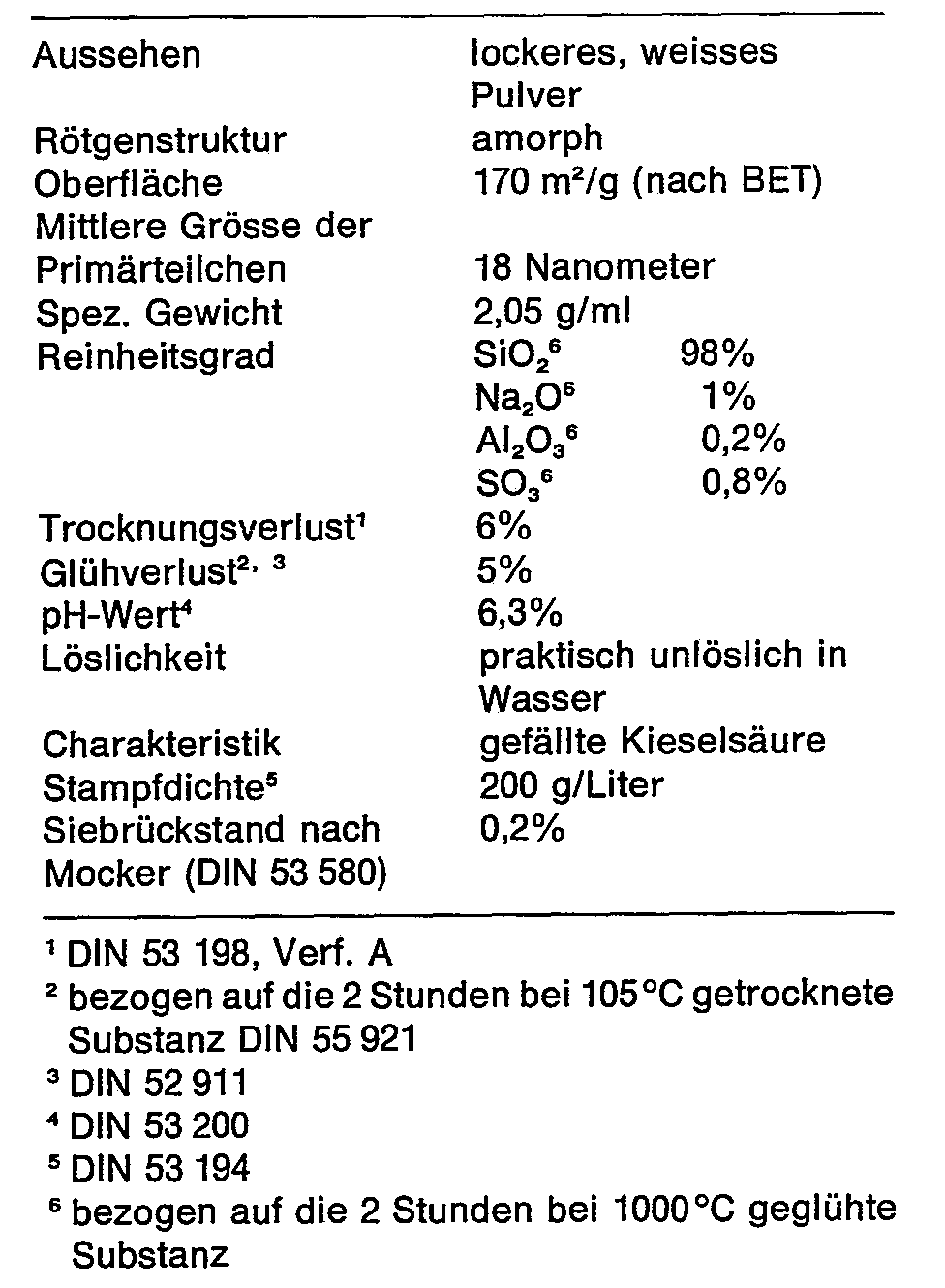 A silica 320 DS is a precipitated and steam jet milled silica with the following physical-chemical characteristics: 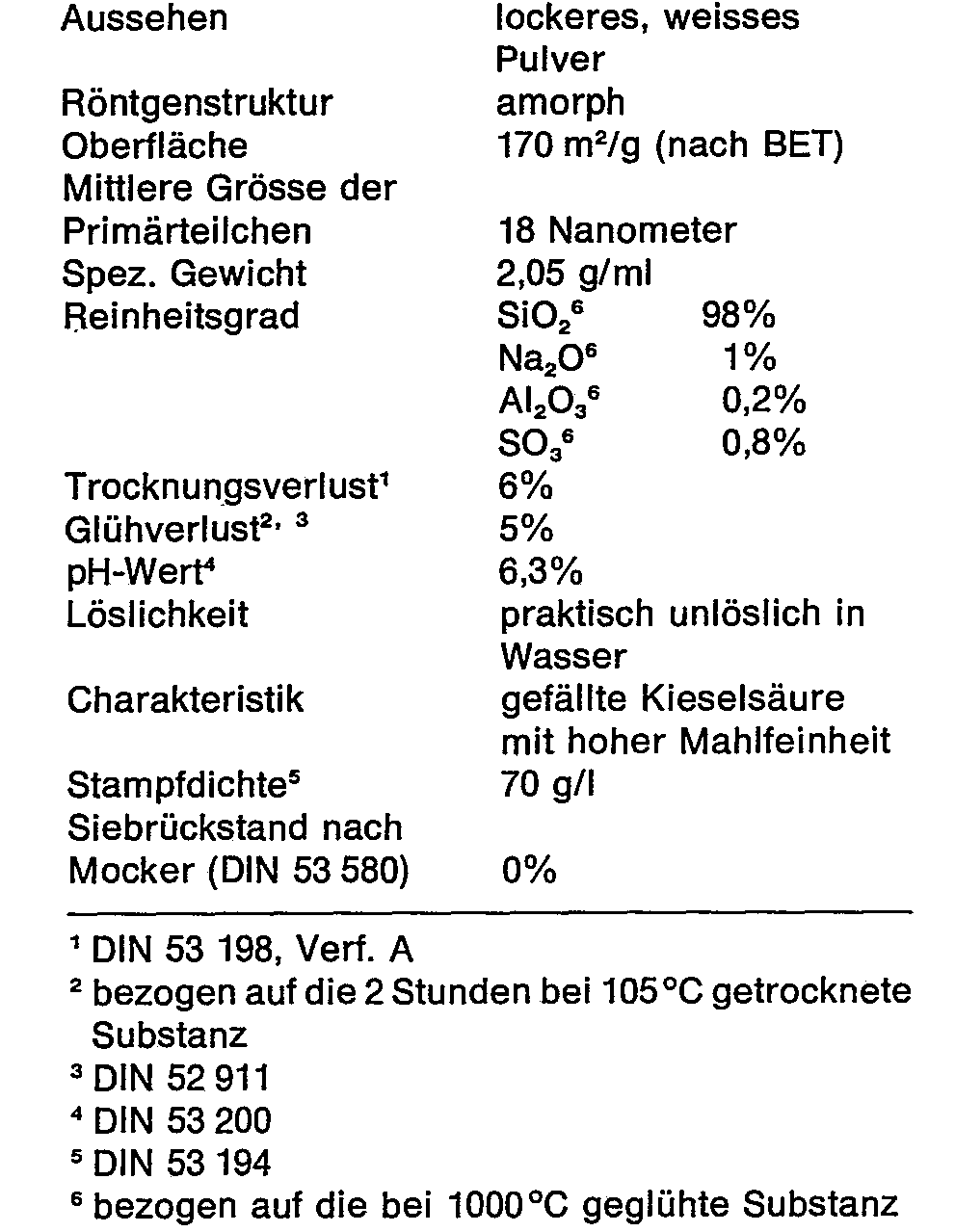 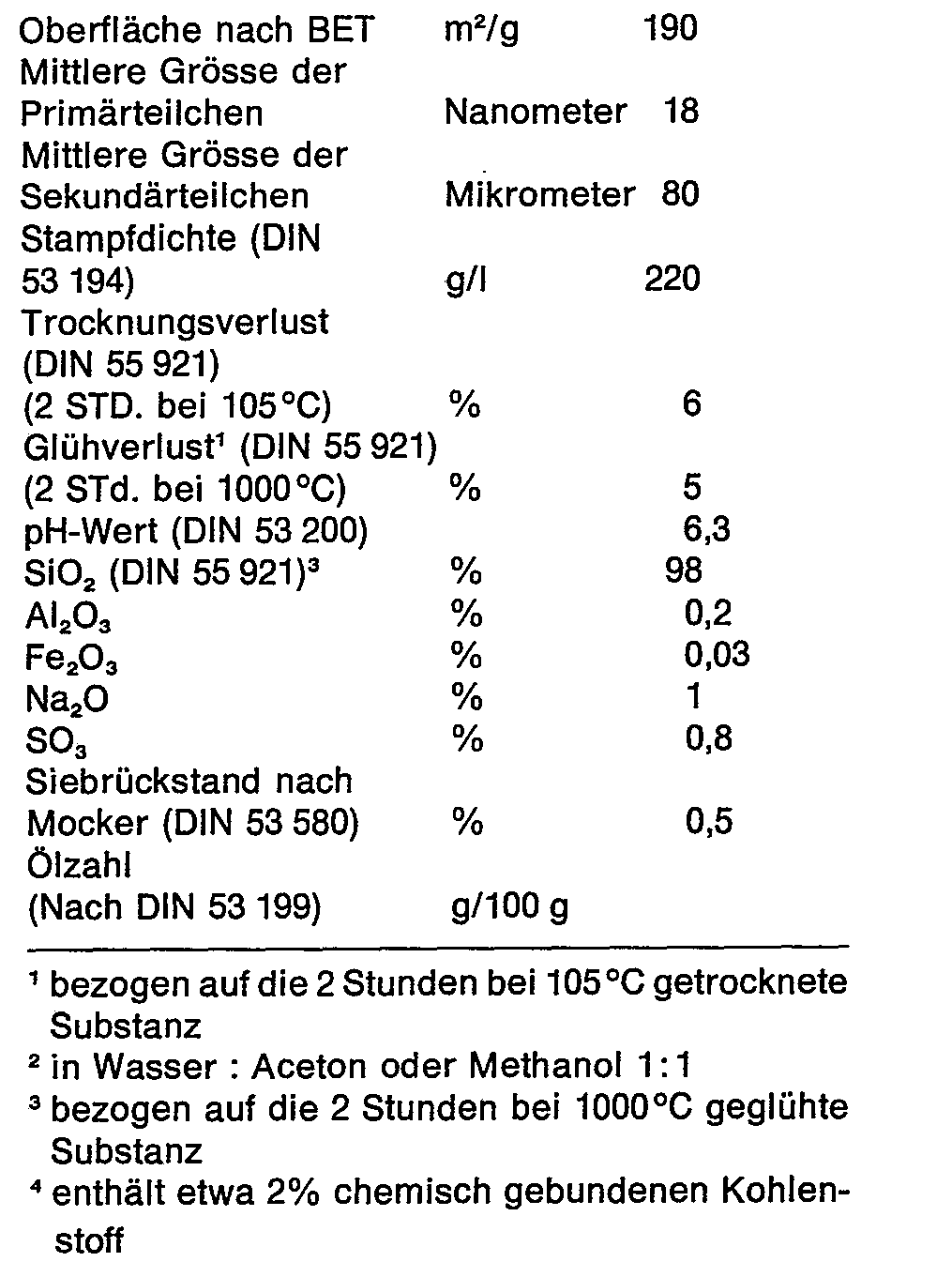 Application of the powdered bitumen concentrate in asphalt
These are the following substances and combinations of substances:

1. Production of test specimens according to Marshall from the various asphalt mixtures

2. Determination of bulk density, voids content as well as stability and flow value according to Marshall on the test specimens according to 1.

3. Carrying out creep tests on three test specimens produced according to 1.. Investigations and test results Composition and manufacture of the test specimens

For the mineral mixture for producing a grit-rich asphalt concrete 0/11 mm according to TV bit 3/72, precious basalt chippings, precious basalt crushed sand, a natural sand and a commercially available limestone powder are used. The minerals, with the exception of the limestone powder, are sifted out into grain classes and the mineral mixtures are reassembled according to a prescribed recipe.
[0026]

Basalt fine crushed sand and natural sand (in a ratio of 3: 1)

The following grain size distribution of the mineral mixture is thus achieved for all mixtures:

The binder content of all mixtures is 5.9% by weight.
Table 3 gives an overview of the composition of the mixtures.
Mixing process and test specimen production
The asphalt mixtures are mixed in batches of 6,300 g or 4,000 g in a laboratory mixer, observing a uniform sequence.
The powdery additives are introduced into the hot mixture after the bitumen content, but before the limestone powder.
The corresponding amount of Trinidad-Epure is melted and previously added to the bitumen portion.
No peculiarities are observed in the asphalt mixes. In all cases, the result is a uniformly coated, normal appearing mix.
5 + 3 = 8 Marshall specimens are produced from each mixture variant.

Of the eight test specimens, three were used to determine stability and flow value and three for the creep test.
Volume density and void content are determined on all test specimens.
The results are compiled in Table 4.
Creep tests with static load are carried out on 3 test specimens of each mixture.
The base surfaces of the test specimens are leveled by a leveling layer.
In the experiment, a uniform surface load is applied to the test specimen at a test temperature of 40 ° C.
The uniaxial compressive stress is 0.1 MN / m2. The creation of the uniaxial stress state is promoted by the arrangement of a sliding layer. The resulting compressions s = A h / h 1,000 in% o are plotted on a double logarithmic scale, so that the function of the elongations from the time after 1 to 5 hours shows an asymptotic end value.
For the transition t → ∞, an end strain and a deformation modulus Smix can be derived as a material code.
The ultimate elongation and the modulus of deformation are compiled in Table 3 for the mixtures examined. 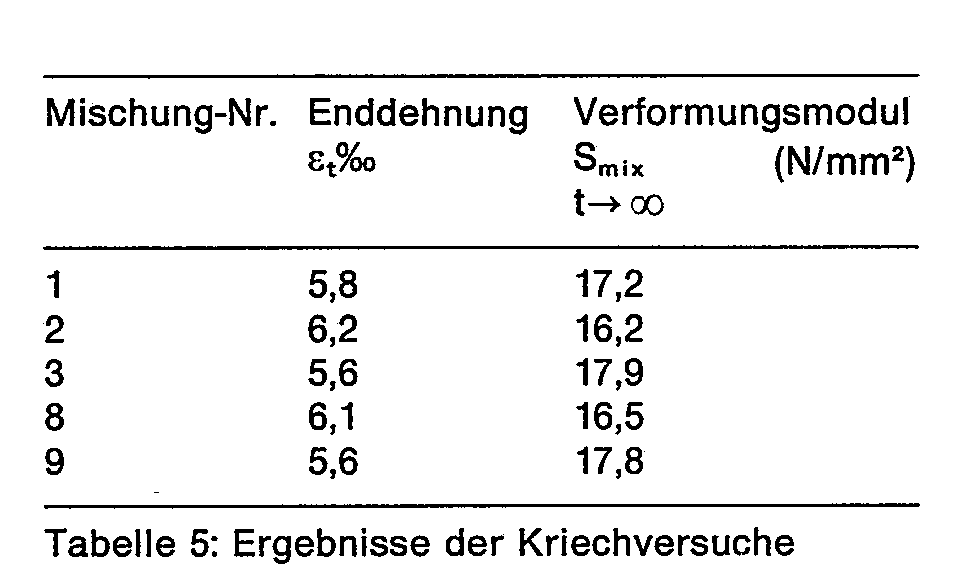 Assessment of the test results Obvious assessment of the asphalt mix
The mixtures with additives (3, 8, 9) do not differ in behavior and appearance when mixed from the zero mixtures (1, 2). Special features compared to normal, mixed-plant mix are not determined.
Properties of test specimens The test specimens produced under the same compression conditions at 135 ° C. show differences in the spatial densities between the zero mixtures on the one hand and the mixtures with additives on the other. They give an indication of the conditions when paving the mix.
In the laboratory tests, the compression resistance of the mix at 135 ° C, which is characterized by the voids, increases when both SIPERNAT 22 and Trinidad-Epure are added, i.e. both additives have a stiffening effect.
The greatest effect is produced by adding the Sipernat / bitumen powder (mixture 9), whereby it should be noted that the proportion of Sipernat in the total mixture is increased again compared to mixture 3. Mix 9 and Mix 8 (Trinidad-Epure) offer an interesting comparison, as in both cases mineral / binding agent combinations are used with roughly the same proportions in terms of quantity. Based on the results it can be stated that the stiffening produced by Trinidad is even exceeded by the synthetically produced products.
Creep test Creep tests at 40 ° C. provide information about the deformation resistance of the mixed material. They indicate the conditions under traffic with increased outside temperatures.
The results of the laboratory tests show significant increases in the relevant deformation modulus of the mixtures with SIPERNAT 22 (3 and 9) compared to the comparison mixture with B 80 (mixture 2), with a simultaneous reduction in the corresponding final elongations.
The results of the creep tests at 40 ° C. do not reveal an equal increase in the deformation resistance of the mixture with Trinidad-Epure.
1. Powdered bitumen concentrate with a synthetic silica content of 10 to 85% by weight, preferably 40 to 80% by weight.

2. Use of the pulverulent bitumen concentrate according to claim 1 for the production of asphalt mixtures for road construction.

1. A pulverulent bitumen concentrate containing from 10 to 85% by weight, preferably from 40 to 80% by weight of synthetic silica.

2. The use of the pulverulent bitumen concentrate according to claim 1 for the production of asphalt mixtures for the construction of roads.